These documents have all been compiled by Graham White – grandson of Mary Ann. There are many photographs or documents of members of the family which are not in this document but can be found by clicking the relevant links. For example to go to the page with all the details of the gravestones, click the gravestones button below.

Parents: (all born in East Prawle)

Siblings: (all born in East Prawle)

The early life of Annie has not been fully discovered.

She was born on her family’s tenanted farm, known as Torrings or Sullocks Farm, in the middle of East Prawle, Chivelstone, South Devon in 1891, the middle child of 5 (Her younger two brothers were twins). The family would have lived in relative comfort in comparison with the average villager due to their tenanted farm status. 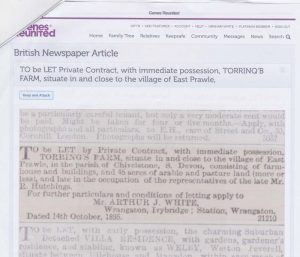 Her father died in 1895 when Annie was three. As a consequence, the tenancy of the farm had to be given up immediately (‘letting with immediate possession of Torring’s Farm dated 14th October 1895’) and the family had to move elsewhere. 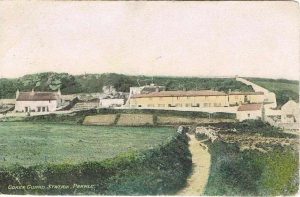 Their standard of living would have reduced substantially thereon. We do know that Betsy Eva, Annie’s elder sister, went to live with a Mrs Eddy in February 1897 and then at Derwent Lodge in 1899 but we do not know where the rest of the family lived until 1901. The family was found again in the 1901 Census (taken 31.03.1901). According to the Census, the entire family, including Annie and Betsy Eva, are now living in the Coastguard Cottages, about ¼ mile away from the farm. William George Eastman lived in the same cottage at this time.

However, the family’s circumstances changed very quickly for the worse again when Annie’s mother died 0n the 8th June 1901. At this time, Annie was 9. This is where Annie’s journey in life is not known until 1909. 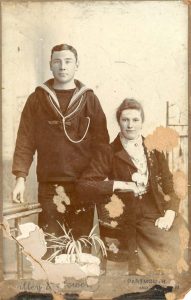 In Q3 1901, Betsy Eva married a Coastguard, William George Eastman (Matalow). It might be due to this relationship that the family were able to secure this coastguard accommodation for the entire family.

The most likely scenario is that when their mother died, Annie and the twins were looked after by their sister Betsy Eva and William George, in East Prawle, until 1903.

During this time, we know that William George and Betsy were married in 1901 and had their first child, Eva Melita Jane Eastman, known as Melita, in East Prawle in 1902.

In 1903, after Richard Hopwood joined the Royal Navy, William George and Betsy Eva were moved to Paignton Devon Coastguards, and, I believe, bringing with them Annie. The theory is that her twin brothers, at this time, were then looked after by relatives in the East Prawle area where they stayed until they grew up, whilst Annie stayed with her sister and brother in law.

On the 26th August 1904, William George was transferred to Atherfield, Isle of Wight, a settlement solely consisting of coastguard houses situated west of Ventnor on the south coast of the Island. It is thought that Annie followed them To Atherfield. While at Atherfield, William George and Betsy Eva had two more children, Thomas Richard (known as Richard) in 1905 and William Robert (known as Robert or Bert) in 1907.

From there, they moved to West Street, Coastguard Cottages at Ventnor in April 1907 and, again, it is thought that Annie most likely moved with them. (See attached Addendum on the facts and theory of Annie’s whereabouts).

Betsy Eva died in 1909. We know from postcards dated around 1909 and thereon that Annie was living permanently in Ventnor. This was confirmed by the 1911 census and my mother’s side of the story. We also know that the eldest daughter, Melita, was sent firstly to a Mrs Northcott at Gurnard IOW Coastguard Cottages and then to her Uncle and Aunt, in Plumstead, London during the illness of her mother and subsequently during the illness of her father. The two boys always stayed in Ventnor under the care of Annie when their parents were unable to look after them until 1913.

In 1910, William George Eastman became very ill and was sent to the Isolation Hospital in Willesden (Not sure if this IOW (probable) or London). As mentioned above, Annie was on her own in Ventnor looking after the two boys and sometimes Melita who spent some of her time with her uncle and Aunt in Plumstead. William George Eastman returned back to Ventnor before the 1911 Census when he was registered as the main householder at West Street Ventnor, with Annie, Richard and Robert living at the premises. William George Eastman died in 1913.

On his death bed William George Eastman requested that the two boys should continue to live together and so they went to live with their Uncle Bob at Freefolk, a village near Whitchurch Hampshire. Melita stayed with her Uncle and Aunt in Plumstead until she was 14 and then went into Service.

Annie met her future husband, Thomas Miles Bloomfield, my grandfather, at Ventnor in July 1913, when she was 22, one month before William George died. Thomas Miles was stationed in Ventnor for his first experience as a Coastguard when coming out of the Royal Navy after serving his 12 year commission. They married in Holy Trinity Church Ventnor in June 1914 with Melita as bridesmaid.

Annie moved to an address at Archville, Bonchurch, IOW but she eventually returned to West Street Ventnor presumably when she married Thomas Miles. Thomas Miles was recommissioned back into the Royal Navy shortly after they married due to the outbreak of WWI and Annie stayed in West Street, until his return from his overseas postings, in 1919.

Whilst Annie lived in West Street Ventnor (The Coastguard cottages) she gave birth to Eva Mary (known as Mary) in 1915.

In November 1918 she travelled to Rolvenden, Kent when her brother, William Trible who was in the Army, died of flu 3 days before WWI ended. She appears to have been the executor of his estate.

When Thomas Miles returned, in 1919, he continued his Coastguard role, as Leading Boatman at Ventnor. Thomas was then relocated almost immediately to Eire with Annie and Mary. He was firstly stationed at Belmullett, then Blacksod, on the east coast, where he and the family would have witnessed some local problems with ‘The Troubles’. Subsequently they moved to Cloughy near Port-a–Ferry, Northern Ireland. During this period in Eire and N. Ireland they had four more children:

Family information is sparse thereafter until they arrived in Teignmouth, but it is known that Thomas Miles was posted to Drummore near Stranraer in Scotland (no information found) and then finally transferred to Teignmouth Coastguards on 4th December 1928.

The family lived in no1 Coastguard Cottages, Ivy Lane, Teignmouth.

Mary Ann Phillips died of cancer, at her Coastguard home, when she was 43 in 1935.

Annie had a difficult life. It was full of change and tragedy from the earliest times with the death of her parents when she was young and then her siblings and close relatives. She clearly found happiness with Thomas, her husband, when they raised 5 children whilst travelling around the remotest parts of the UK and Eire. Even this happy part of her life though started with the long separation from him due to WWI. That aside she lived in close communities that were the Coastguards and clearly from her postcard book she had many friends. Sadly, those happy times, at last settled in Teignmouth, were also cut short. Her life was dedicated to caring for others and her family.

Her nephew, Thomas Richard, whom she looked after at Ventnor, had a son; Ronald William Eastman. Ronald (Ron) William Eastman became a renowned Wildlife photographer and Film Director who made the much acclaimed first ever BBC TV wildlife documentary in colour, in 1966; ‘Look: The Private Life of the Kingfisher’. He introduced new photographic technics that revolutionised wildlife photography at the time, with his wife Rosemary. This work inspired a whole new series of ‘Look’ on the BBC. He worked with all the major wildlife commentators of that era including David Attenborough and Peter Scott.

The best kept secret was that he was the key person in the making of the much-acclaimed film: ‘Tarka the Otter’ released in 1978, based on the book by Henry Williamson. He was prima facia the photographer, producer and director and his Whitchurch Water Mill home was the central location which served as a hub for much of the filming, setting up intricate underwater scenes for photographing, editing and producing and training the animals with his wife; Rosemary Eastman. (Source Pete Talbot ‘Tarka and Me’ e- book). Ron also came up with the idea to make the film, at the very beginning, but he was usurped on this at the outset by his friend David Cobham (Director) who was able to finance it, but he agreed to take the central role in the making thereof, fulfilling most roles.

Very unfortunately, and some long way into the production of the film, Ron and Rosemary Eastman withdrew entirely from participating further and subsequently insisted no credits could be associated to them when the film was ready for release. The reason behind this occurred when, mid production, the film makers decided that they wanted the otter to be hunted for real so that the film sequence did not look faked. This was totally against Ron Eastman’s principles and following a heated argument he refused to do it and resigned wanting no further involvement. However, much of his work was included in the final film including the sequences made at Whitchurch Water Mill and on location elsewhere.

When Annie was living at Atherfield the family were living on top of an area of scientific interest where many examples of dinosaur fossils have been found.

When living in Bellmullet, there were local issues with the Irish Troubles and one Coastguard station was attacked and burnt down. It is not known if this was where they lived.

Assistance, sources and thanks from:

Dedicated to the grandmother I never knew but wished I had.