Return to Born in Prawle

Brenda Out to Work 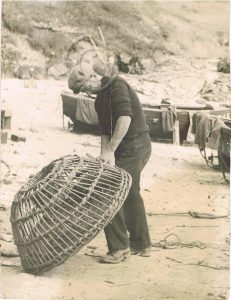 Bill Blank at Ivy Cove with a crab pot

I was born in September 1939 and in March 1941 Hazel came along. Dad was in the navy on the mine sweepers, during the war. Before that he was a fisherman off of Lannacombe in partners with Fred Login.

When he was demobbed he went to work on the farm for Mr Geoffrey Tripp. Mum didn’t work for many years as she had my sister and I to look after and wives didn’t  go to work in those days – they had to care for the family,  but later when we left school, Mum and Hazel had job at Gara Rock Hotel and pushed biked over there. After that she worked for Mrs Webster out at Bonaventura for a while who took in visitors.

Hazel used to do hairdressing for villagers after finishing work. She used to have a shopping trolley and pull it around the village with her hair drier in it. It was a big one like salons have, this one rested on a table; she charged 2/6 p for wash and set. Her main ambition was to be a hairdresser, but again lack of transport made it difficult. Hazel still washed and set Alice Stone’s hair until 2019; she done it for over 50 years for her.

In our summer school holidays, we spent many days on Horsley beach, and in the harvest fields with Dad. We were in the Girl Guides held at the Assembly Room, which was part of the Providence Inn. There used to be barn dances at Higher farm, which was great fun and most of the villagers used to turn up. There was also a youth club.

We used to go to Thurlestone hotel to the Young farmers dance, William Tucker used to take us with his sister Sally – Hazel at the time was working for his parents, Mollie and Jack Tucker. It was at those  dances  we met  our future husbands,  who both lived at Thurlestone. I married Brian Jeffery on the 25th September 1965 and Hazel married Jim Roberts on 28th September 1968. We were both married at Chivelstone Church, Brian and Jim both loved living in Prawle and never wished to go back to Thurlestone, so that is  saying something about Prawle. Our father, Hazel and I were born here in the village and our son Sean was born in Freedoms Fields Hospital Plymouth, but still lives in the village and I was lucky when he married Karen that they remained here in Prawle with our two grandchildren Emily and Felicity.

On December 17th 1954 I left school, but in the summer of that year I worked for my Auntie May Jarvis, who was my cousin. In those days you called them aunts and uncles as they were much older then you, and we were brought up to respect our elders. My aunt and Uncle Arthur lived at Ferndale House at South Allington after moving from the Providence Inn which they owned. They took in visitors and wanted help and I thought it would be nice to earn some pocket money, which I did. In the October their son Gerald got married, and with the money I earned, I bought a green coat and a mustard coloured dress to wear, and so proud I had earned the money to buy it myself.

While working at Ferndale, I used to go down to Garlands Farm just around the corner to get the milk. It was then Mary, the house keeper and Mr Fred Tripp the farmer, asked me if I would like a job and I said yes as I was leaving school in the December. I came home and told Mum and Dad I had a job offered to me. Mum wasn’t very happy about it as she didn’t want me to do domestic work. My granny used to live with us, and she told Mum let her take it and if she don’t like it she can leave, and thanks to my granny I was there until Mr Tripp died In February 1984, which was 30 years. I enjoyed every moment of it, I used to push bike there and back six days a week from 8.30 till 5 o’clock for £1 and ten shillings a week. We took in visitors and done cream teas. In 1964 Mr Tripp bought Garlands Farm and South Allington House, as Mr Pitts who owned the properties and two other farms nearby sold it all up. Mr Tripp and Mary moved into South Allington house and we took in 40 visitors for B and B and evening meal. Of course we had to have other helpers, Garlands was still the working farm and children that was on holiday at the House used to go to see the cows being milked, Mr Tripp used to say to them I am going over to milk the ducks, and the younger children used to believe him. 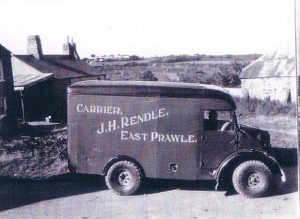 We grow anemones, so one of the jobs was picking them, so Mrs Pack, Mary and myself used to go to where they were growing; it wasn’t very warm picking them in the winter months, your hands would be freezing. In the warm months the flowers would grow like mad, we used to bunch them up in twelves, but when joining the Common Market it had to be in tens. We packed them in boxes and Mr Rendle the Prawle carrier used to take them to the railway station in Kingsbridge and off to London. They would go to the London market, Pash Cornish and Smart Covent Gardens, I have written hundreds of labels to stick on the boxes. You would got a shilling a bunch for them, which was good money then. 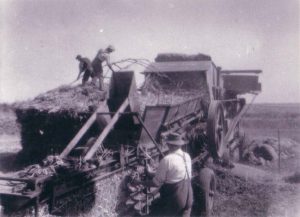 Bill Goodman with his threshing machine

When it was threshing season, Mr Dick Wotton and Mr Willy Goodman used to bring their threshing machine to the field where they would have to work, we used to provide their morning break snack, which was known as drinkings.

We used to cut off thick slices of bread and put plenty of cheese in it, the tea was in a big kettle – you only had loose tea which you would  put it in a bit of muslin and tie it with a  piece of string, and on the spout of the kettle we would put a potato so when they took it out on the tractor it wouldn’t spill. At lunch time we would roast a large piece of beef, and plenty of vegetables and the local farmers and their work men who would be helping would come in for their lunch. There would be twelve to fourteen men sitting around the farm kitchen table.

When both Mr Tripp and Mary died, my job ended, but I still wanted to work, so I went and worked for the elderly cleaning for them, up until 2019, when I retired, but enjoyed every minute of it as they were so grateful and appreciated all you done for them, Their family used to class me as part of their family and we still remain in contact will each other which is lovely. My main passion was to be a nurse, but living in Prawle you didn’t have the chance, lacking of transport, so working for the elderly latterly was the next best thing, as I used to do things for them more than cleaning.

Our Mum Ellen, known better as Nellie, was a Portsmouth girl and met Dad, William known as Bill, here in Prawle when visiting her Aunt and Uncle Polly and Bert Presley who were posted to Prawle Point as the station officer out there. In October 1938 Mum and Dad were married in Mum’s home town in Portsmouth, but when married Mum made her home here in Prawle.

Dad taught us both to drive, we were both in our earlier twenties. We practiced in a field over at Moor and when we were fit to go on the road, one would drive out and the other drive home, dad must of had a lot of patience to teach both of us at the same time.

Prawle is my life, and I have enjoyed all my childhood and growing up and working days here and I wouldn’t change it for the world, though not the same as it used to be, but wild horses won’t drive me away.