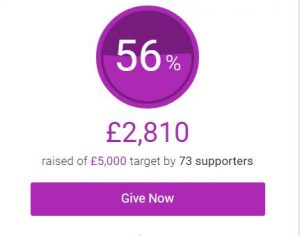 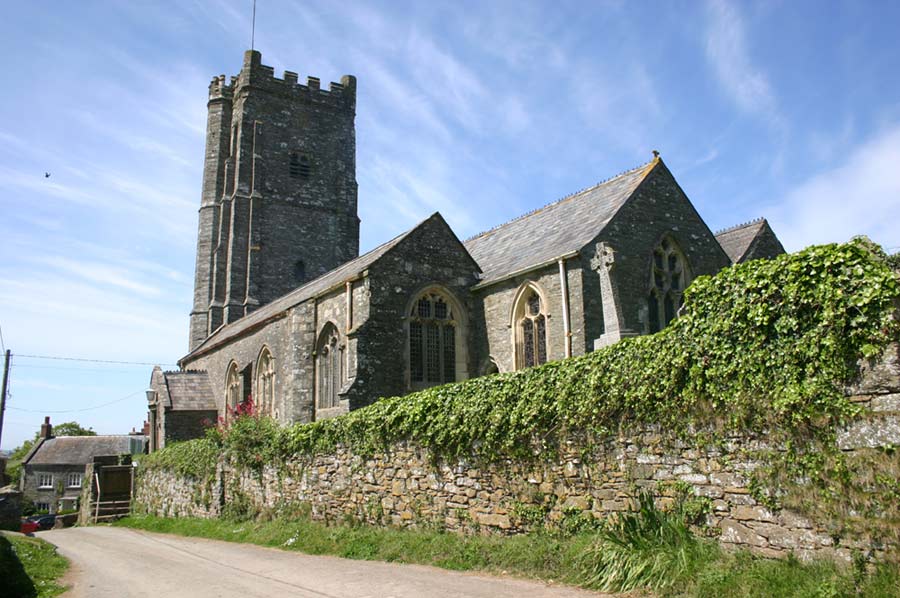 A lot has been happening recently. The good news is that the repointing of the tower is three quarters complete. The bad news is that we are not allowed to ring the bells for at least six months whilst the new mortar sets. This will mean that we cannot do bell ringing classes at our Open Day. Therefore, we are arranging for several other musical events to take place instead. These will include hand bell ringing. More details in a week or so.

We have been lucky to obtain a grant from the Beatrice Laing Trust for £5000 to help pay for a kitchenette. Although we need more funds to complete it, we have decided to go ahead whilst the building contractors are on site. This was part of the conditions for receiving the grant. Below is a drawing of the kitchenette.

Chris Jones of Smith & Jones Design is helping us with the new “Interpretation” for the Church. This is all part of the Lottery project. “Interpretation” is the information boards and leaflets that will be in the Church for all visitors. Part of this is a touchscreen computer which will hold a lot of information relating to the Church itself, the community and several other subjects of interest. These can be updated whenever necessary. Below we give a concept drawing of this interpretation. These towers will be movable. 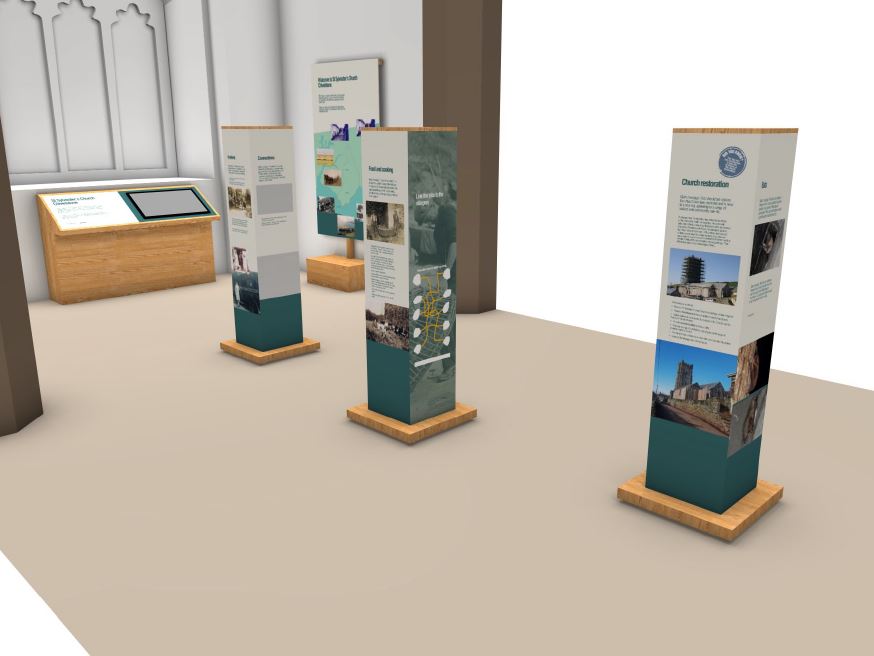 In the previous blog we showed the window being taken out for repair. In this one we show the window slowly being rebuilt.

The Vestry ceiling has been repaired. This was not as straightforward as it might seem, as the plaster work was a relatively unusual reed plastering, which is only undertaken by specialist firms.

The good news is that we now have a date for the cleaning of the XVth century pulpit. It will start at the end of September. We are planning to have a further “hard hat day” (for the Lottery) during the week of 4 October, when it will be possible to see the before and after work on the pulpit. As soon as a date is confirmed we will let you know. Originally the pulpit was painted in bright colours, but over the years it has been varnished over to such an extent that the colours hardly show. Once cleaned, the original colours will be seen again. There is only one pulpit that is similar to the one in the Church. It can be found in Holne Church and was restored a few years ago. Ours should look similar when completed. Below please see a photograph of our pulpit and the restored one in Holne Church. 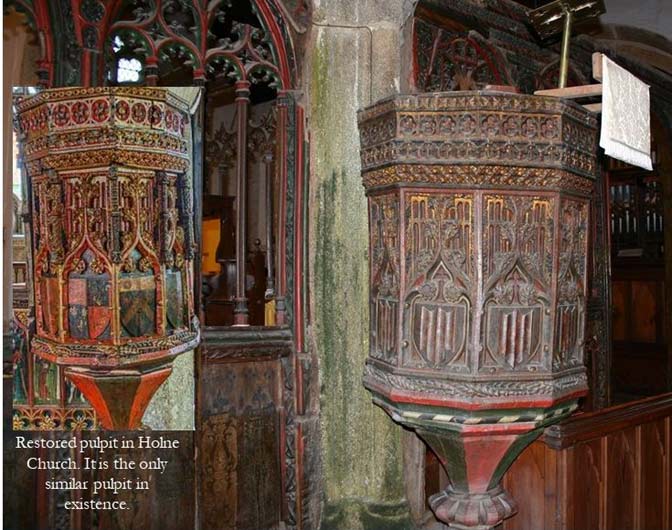 The rest of the blog is largely photographs taken by our architect, Amanda Le Page, of parts of the tower and the stonemasons’ work on the repointing of the tower.

As we have already mentioned, as part of our Lottery project Nicky Bailey, our partner from the South Devon AONB, has been working with Sara Hurley to create a film based around the Blizzard of 1891 and the wreck of the Marana, which took place near Start Point. The idea of this film was to circulate it amongst the local schools and ask the children to write the ending. For full details please go to the Shipwrecked Sailors page.

The first part of the film was made in Chivelstone churchyard, next to gravestones of sailors who perished in the storm of 1891 from the wreck of the Marana. Sara’s story telling was based on a character of the wife of Mr Perry, the coastguard. This was sent to all the participating schools with an information pack about the wreck and guidance notes.

Stokenham, Charleton, Salcombe and Malborough Primary Schools took part. Over 120 stories were written and we the judges (Nicky, Sarah, Vicky, Kate and Mark) had to read them all. It was really quite difficult to decide amongst so many. Again full details can be found on the Shipwrecked Sailors page.

The overall winner was Ayla from Malborough: 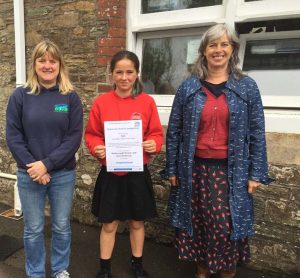 The winning story was filmed, again being narrated by Sara Hurley in the character of Mrs Perry.

The Hard Hat Day event took place on Tuesday 27 June, with 28 people attending 6 sessions and was a great success. Everyone was asked to complete a survey and below are some of the comments made.

Full explanations can be found of the Hard Hat Day page on the website.

Here are two videos taken on the Hard Hat Day (click on the photographs):

Westcountry Stonemasons have now started on repairing the windows. See more photographs below. 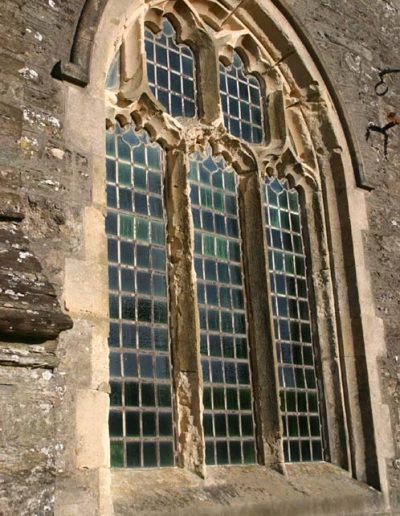 Window of St Sylvester’s Church badly in need of repair 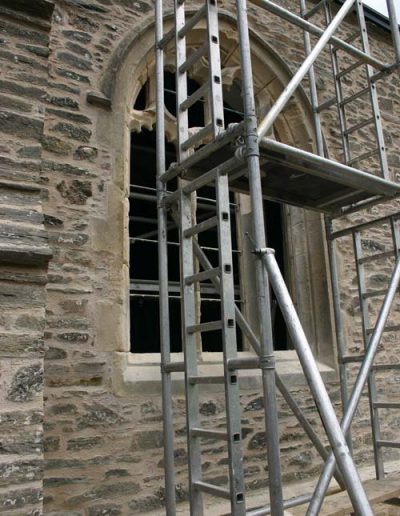 South window with glass taken out 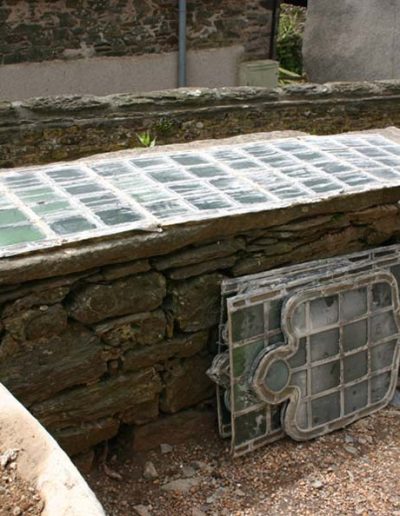 Glass from the South window on the wall

The Church is slowly hatching from the scaffolding, in which it has been living for the last few months. Although it will be several more months before it finally emerges, we are beginning to see the results of all of the work. 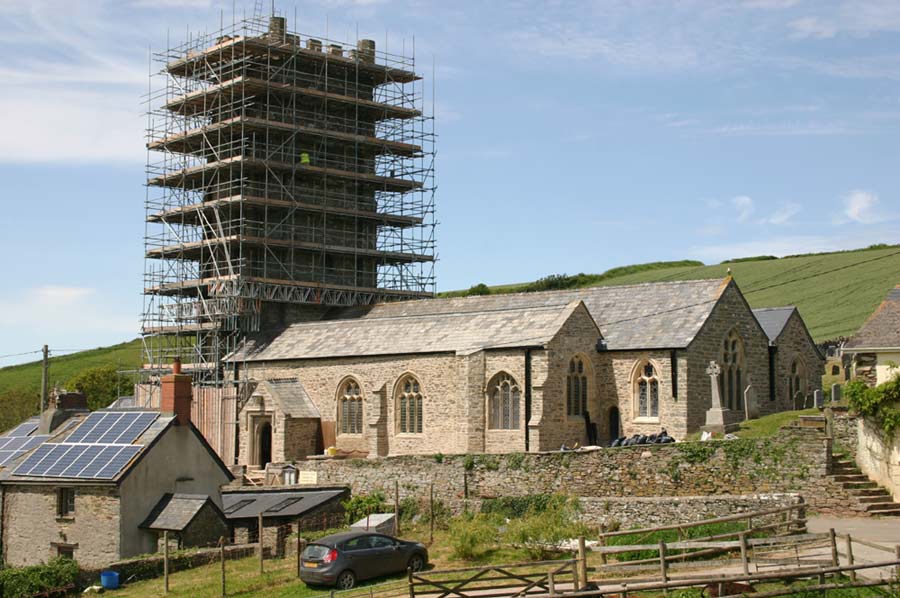 The weather for the Dusk/Bird Walk on 27 May was perfect. Adam Davison took twenty one people round the lanes from St Sylvester’s Church, Chivelstone. Everybody enjoyed themselves and felt they had a greater understanding of bird habitats as well as more about the Renovation of St Sylvester’s Church funded by the Lottery.

Nicky Bailey, our partner from the South Devon AONB, has been working with Sara Hurley to create a film based around the Blizzard of 1891 and the wreck of the Marana, which took place near Start Point. Nicky has invited various schools to take part in writing the end of the story. The best story will be added to the end of the film.

The four schools involved in writing the ending of the film created by Sara Hurley and Nicky Bailey are : Stokenham Primary School, Charleton C of E School, Malborough Primary School and Salcombe C of E School. All schools have sent us stories from their schools to be judged. There are just over 100 stories. Nicky Bailey, Sara Hurley, Kate and Mark Jennings and Vicky Tucker read all the stories and have agreed the winner and runners up (no easy task). This still has to be finalised, but it has been wonderful to read the stories written with such enthusiasm and gusto. It is hoped to finalise the film shortly and then make the announcements.

A date for your calendar: On Sunday 27 June between 1 and 4 pm there will be the Prawle Bees Discovery Day, on East Prawle Village Green. Bug hunts, wildlife walk and much more including Chivelstone Church Stalls.

Although nothing actually to do with the Church as such, the South Devon AONB are helping to protect East Prawle’s rare and special species. The Six Banded Nomad Cuckoo bee survives only at Prawle Point. The Long Horned Mining bee is also extremely rare. The AONB have produced packs of seeds and instructions so that people can grow the flowers to help the bees. These can be collected from the Piglet Stores. Flowers from the pea family are an important source of nectar and pollen for a range of wild bees and other pollinating insects.

Rob Bunn came on the Dusk/Bird walk and mentioned that he had managed to take a couple of photographs.

This has been going really well and so far we have raised £2,515 or 50%. We really need to reach our target, so if you haven’t contributed so far please help us. Click here for the link to the jigsaw. 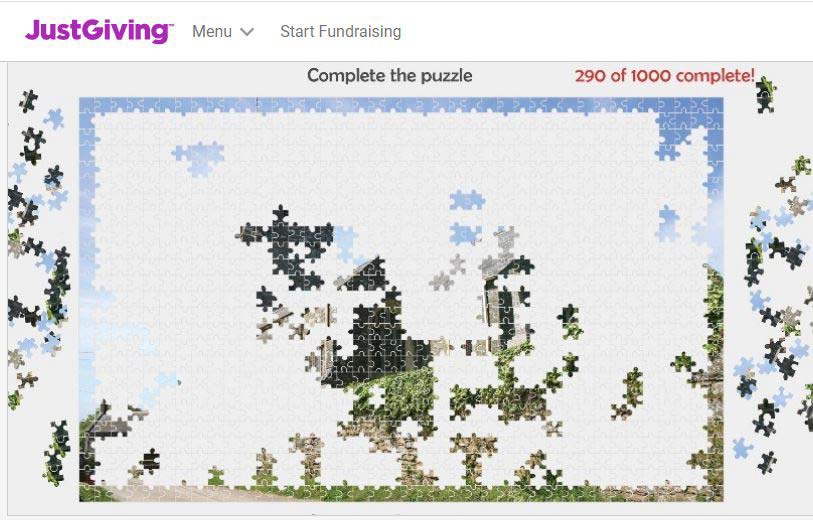 St Sylvester’s Church is now completely scaffolded. The Church normally looks as above, but not at the moment. It’s a spectacular sight. 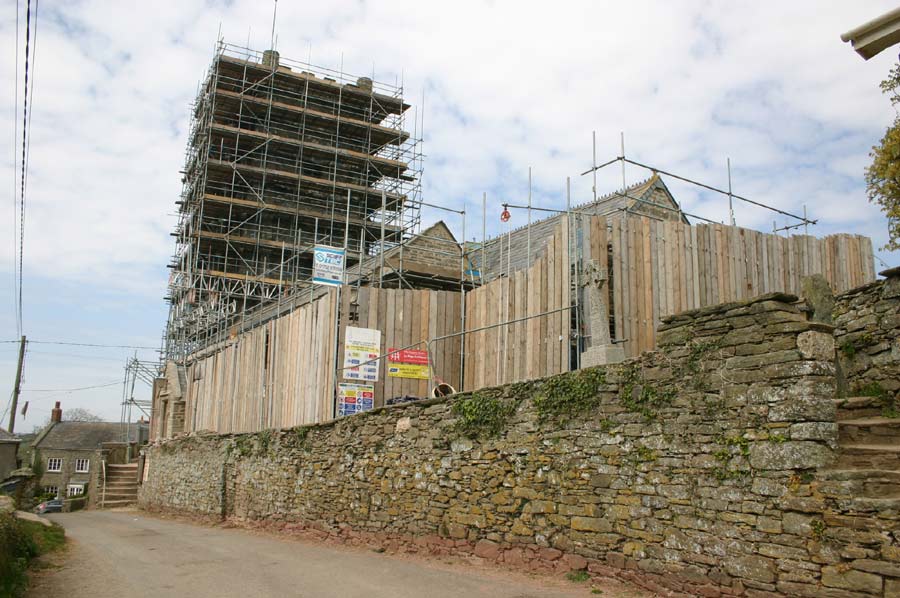 Joe Johnson has now created another drone video of the Church, this time completely surrounded in scaffolding. It is wonderful to see the progress being made to the repairs of the Church. The video is now available on St Sylvester’s YouTube. Thank you Joe. 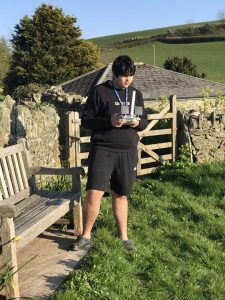 Join Adam Davison from the AONB team for an evening walk around some of the paths and green lanes of Chivelstone, catching the birds as they settle down for the day and the bats coming out for the night! The walk is run in partnership with the Chivelstone Church restoration and community project, volunteers from the team will give an update on this exciting project at the start of the walk from the churchyard.

Numbers are strictly limited, please book your place to get your free ticket from the AONB website and bring it with you to register on the day. Anyone without a ticket will not be able to join us on the walk. Register for your free ticket here. This event will be run in line with the current COVID-19 restrictions at the time. Meet at St Sylvester’s Church, Chivelstone, TQ7 2LY.

We are planning on having a hard hat day on 25 May. Westcountry Stonemasons, who are doing all the work to the Church, will conduct short guided tours to show the work they have been doing and answer any questions. These will be 20 minute sessions, but we can only have five people at a time, so we will have to allot time to anyone who wants to take part. If  you are interested in taking part please can you email katejennings02@gmail.com.

The JustGiving jigsaw has been going really well and so far we have raised £2,235 or 44%. We really need to reach our target, so if you haven’t contributed so far please help us. Click here for the link to the jigsaw.

The builders, Westcountry Stonemasons, are getting on extremely well and are currently on target. The structural repairs to the South Porch and the Vestry are nearly complete. See the photographs further below. They are starting to scaffold the tower, which should be completed in about two weeks time, at which time the whole church will still be scaffolded. We hope to take a drone video of this, before they start removing some of the scaffolding from the other end of the Church. At some point in the future we will try to arrange a day when visitors can go and see the Church and talk to the builders. 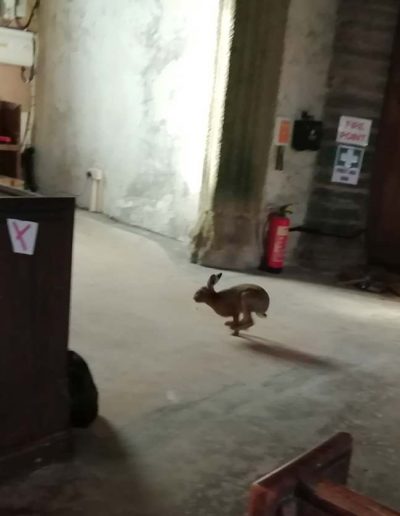 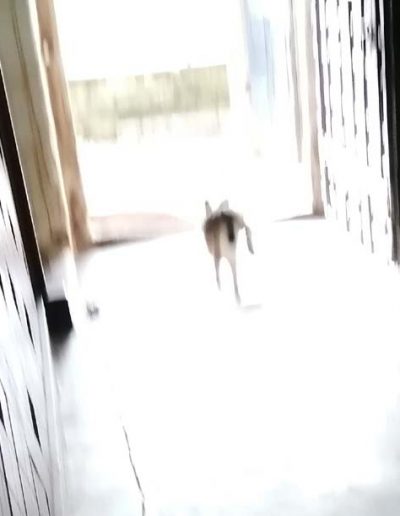 Seen that, done that, I’m off 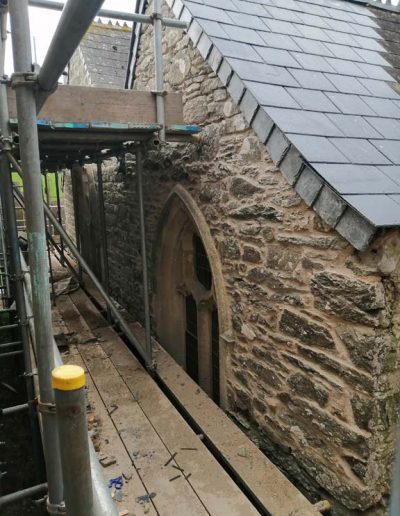 Vestry roof completed. The wall has been rebuilt and repointed 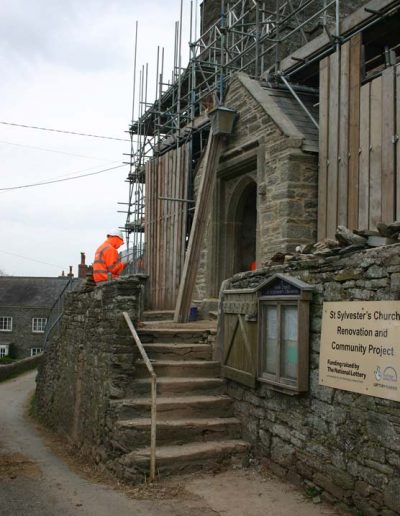 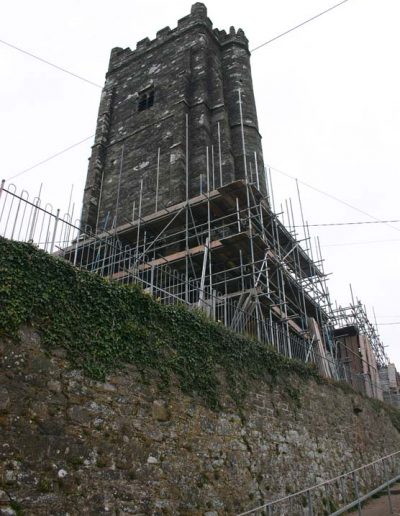 Scaffolding going up the tower 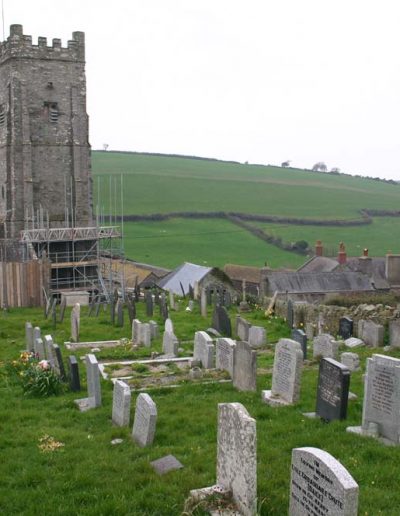 Scaffolding starting to go up the tower 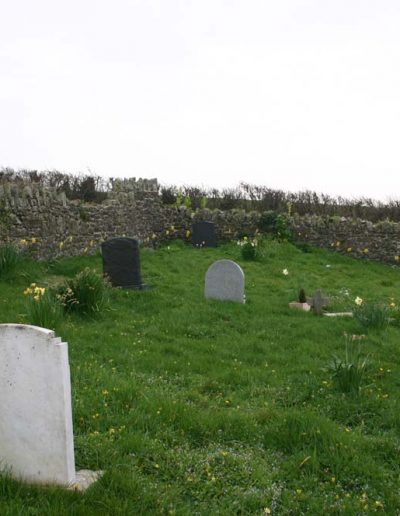 Daffodils round the graveyard planted by Jane Bickle 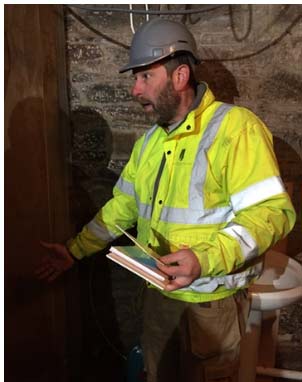