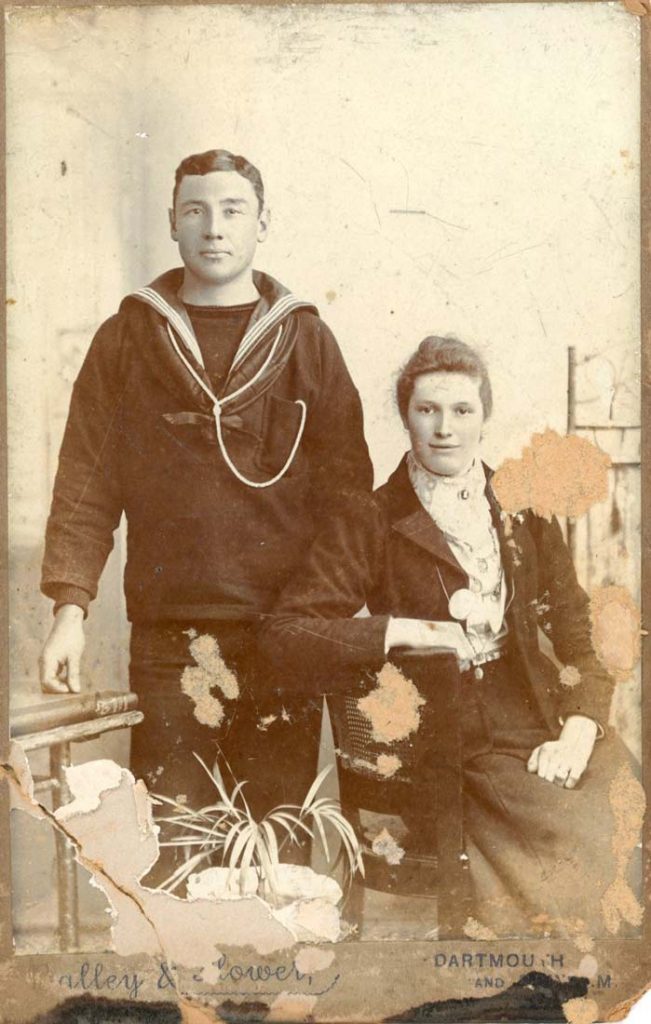 William George Eastman and Betsy Eva nee Hutchings around 1905, thought to have been their wedding day

She lived with a Mrs Eddy from the 24th February 1897 and went to Derwent Lodge in September 1899 before moving to the old Coastguard cottages in East Prawle.

She married William George Eastman (k/a Matalow (sic)) a Coastguard Boatman in Spring 1901 in East Prawle. Betsy Eva was living with her mother and siblings in one of the 5 terraced Coastguard cottages at the same time that William was stationed at East Prawle and living in another cottage. It is thought that the couple looked after the rest of the family at least until 1903. In the meantime, they had their first child, Eva Melita Jane Eastman in 1902 born in East Prawle, presumably in their Coastguard Cottage.

In 1903 they moved to Paignton when William was posted there as Boatman. Whilst stationed at Paignton he received from the Royal Humane Society an award; “The Honorary Testimony inscribed in vellum which is hereby awarded to him for having on the 27th February 1904 at (illegible) risk rescued Alice M Ponsford from the sea at Paignton and for his humanity in restoring her to consciousness,“ The lady was trying to drown herself. The story is that having saved her, she managed to commit suicide on another occasion soon after. It is thought that Betsy and William looked after Annie.

Betsy and William were then posted to Atherfield IOW, where she had two boys, William Robert and Thomas Richard, and then to Ventnor IOW where Betsy died in 1909. William died in 1913 also in Ventnor.

The photograph of Betsy Eva and William was taken in Dartmouth. It is thought to have been their wedding photo, in 1901.