Some Stories of Wrecks around East Prawle

The Wreck of the Marana

The blizzard and great storm of 9 and 10 March1891 was extremely severe. A 36-hour blinding snowstorm, drifts up to 26 feet deep, roads blocked for over a fortnight, coaches stuck etc.

During the snowstorm on Monday evening the steamship Marana ran on the Blackstone Rocks just off the Start Lighthouse. Thirteen crew and passengers drowned with at least eight of them being buried in Chivelstone Churchyard.

Quoted in East Prawle through the Ages by Kate Jennings, is a shortened version of the Marana story from: Eye-witness accounts of the Great Blizzard of March 9th and 10th 1891 in the South Hams of Devon, reprinted by the Kingsbridge History Society (available for purchase from the Cookworthy Museum, Kingsbridge):

The blizzard and great storm of March 9th and 10th, 1891, was extremely severe. A 36-hour blinding snowstorm, drifts up to 26 feet deep, roads blocked for over a fortnight, coaches stuck, mail abandoned, food shortages and much in similar vein.

During the snowstorm of Monday evening, at about half past five, the steamship Marana, ran on the Blackstone Rocks just off the Start Lighthouse. At the time she was steaming full speed. (Mrs Briggs, wife of one of the lighthouse keepers at Start, gave the alert.) Orders were given to get out the starboard lifeboat, and 22 of the crew got into her, with a warning from the captain to be careful and keep off the shore else they might be drowned. The only persons left on board were the captain, the three mates, the chief engineer and the messroom steward. The crew saw them get into the smaller lifeboat and leave the ship, but there is no doubt all her occupants drowned.

The crew in the first lifeboat attempted to make a landing at Lannacombe Bay, a little to the westward of the Start, but it being very dark they again pulled off. A landing was again attempted at Horsley Cove, which is slightly to the eastward of Prawle Coastguard Station, but as there was heavy surf breaking on the shore, the boat was once more headed for the sea. Unfortunately in turning the boat round, she capsized, and all the twenty-two were thrown out. Most of them got on to the keel of the boat, and after a time she righted, but of course was full of water, and only some eight or nine then remained, the rest having lost their hold and were either drowned or killed by being dashed against the rocks. …
Mr Crickett, chief officer of coastguards at Hallsands, received intelligence of the casualty at 6.45 pm, and he immediately despatched a messenger to Prawle, a distance of nearly five miles, for the live-saving apparatus. This message was received at Prawle Coastguard Station at 7.30 pm, and about eight o’clock the apparatus left for the Start in the charge of Mr Hewett, the station officer, accompanied by six coastguards and eleven men belonging to the Volunteer Life Company. The journey was long and very trying and greatly impeded by the snow and fallen telegraph wires. However on arrival, as nothing was known of the crew, but that they were supposed to be all drowned, Mr Hewett proceeded to Beesands, to the assistance of the schooner, Lunesdale that had gone on shore there. He also sent two coastguards to the Start Lighthouse, with instructions that they were to examine the coast to Prawle, to try and find anything of the crew of the wrecked vessel. They eventually found Perry, Lloyd’s signalman, and Rich, coastguard, who were searching for the three men who had drifted ashore. The search party soon found two survivors and a dead comrade in Mr Foss’s Brake.
Seven bodies of the crew were washed on shore at Prawle, very near to where the boat capsized, on the following Wednesday, and these, together with the body of the fireman that died in the field (Mr Foss’s Brake), were brought to the village and placed in a loft.

Further information about the Marana can be found in Roger Barrett’s Prawle Point and the Coast between Start Point and Salcombe Bar, published by the National Coastwatch Institution, Prawle Point in 2011.

In August 2013 members of the East Prawle History Society carried out an exercise to plot the graveyard of St Sylvester, the church at Chivelstone. To their amazement they discovered buried under ivy and bushes a single grave and a further grave containing eight bodies belonging to those who died on the Marana. Photographs and the inscriptions are below: 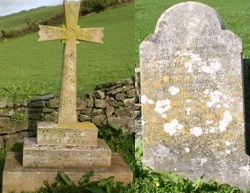 The Wreck of the Gossamer

In Kingsbridge and its Surroundings (1874), S P Fox wrote:

A China tea clipper ship, of 735 tons register, was wrecked in December, 1868, (near Prawle Point) and thirteen lives were lost. There was a strong south-west breeze, and a heavy sea. … Watched by the coastguards, who, under the orders of their chief officer (Mr Pengelly) had got out a rocket apparatus, and conveyed it to the point nearest to the wreck. The crew were  so terrified that they were unable to perceive the preparations being made  for their rescue, and several of them jumped overboard to swim ashore. Most of these, however, perished in the attempt; but all who maintained their position were brought ashore by the rocket apparatus.

The Captain was seen to lash his bride of just two weeks to a spar in the hope that she would stay afloat. For a time the two of them clung to the storm tossed bit of wood until the sea took them. Apparently their bodies were washed ashore shortly after. The gravestone on the right is theirs in St Sylvester’s Church, Chivelstone (Captain John Thomson and his wife Barbara Kerr)