I was born at Coolings Farm (now known as Town Way), East Prawle, in 1941. I was the youngest child of William Albert Partridge and Mary Blanche Partridge (nee Tucker), and I had two brothers and two sisters. 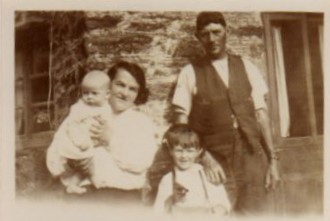 One of my first memories was of village men with shovels over their shoulders, walking by our sitting room window, on their way to dig out some of our sheep, which were buried in the snow during the blizzard of 1947. I remember that one of them was Fred Login (who lived at Fuschia Cottage, at the top of Providence hill) and another “Road Man” Jim Stone (who lived at Hanley Cottage).

I started at Prawle school aged about 5 years old. Bessy Wotton “Teacher Bessy” was the teacher for the young children, and Mrs. Tabb for the older children.

The older boys were responsible for keeping the fires going, by bringing in coal. I used to go home for dinner (lunch) each day.

After school, and, in the holidays, from about the age of 6 or 7, I used to roam around the village with my cousin, and best friend, William Tucker. Sometimes we would stop at Uncle Billy Tucker’s (see later) greenhouse, picking peaches before they were ripe. 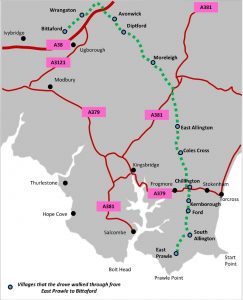 Villages that the drove walked through from East Prawle to Bittaford (frp, ‘East Prawle through the Ages’ by Kate Jennings)

I went a few times in the car, following the cattle to Dartmoor, first day to East Allington and the next day on to Dartmoor. The cattle would then stay there over the summer, allowing more grass to grow and then be cut for hay, for the horses in Prawle.

Christmas dinner took place at Town Farm with the young Partridges, Tuckers and Easterbrooks present. I was always amazed how all of the children seemed to get a silver “threepenny” bit in their Christmas pudding! Sadly, we had to give back the “threepenny” bits as they were re-used the following year. After dinner, my father would disappear and then arrive back, disguised as Father Christmas and distribute presents to all the children.

I started Sunday School at a young age, going to the Methodist Sunday School attached to the chapel. The teacher was “Uncle” Bill Putt (no relation by the way). He worked during the week at Lower House Farm for all his life, as did his father before him. All of us would go around the village singing hymns to raise money for the chapel every Whit Monday, then back to the Sunday School for a cream tea. Also, on Whit Sunday and Whit Monday evenings, we would join up with the children from Chivelstone Church Sunday School, on a small stage in the chapel, and respond to questions from the bible, posed by “Uncle” Bill Putt.

I would go rabbit trapping with Uncle Billy Tucker (my real Uncle this time!). We would “teal” (set) the gin traps. This was a delicate job as the “teal” plate had to be carefully covered with fine earth, once “tealed”, being careful not to set it off and trap your fingers, we would then camouflage them with grass / soil / leaves, so the rabbits didn’t see them. The traps were “tealed” at the exit of the rabbit hole and fixed with a chain and a peg which was driven into the ground. The best soil to use was mole hill soil or soil which had to be sieved. We would set 40 or 50 traps in the evening. 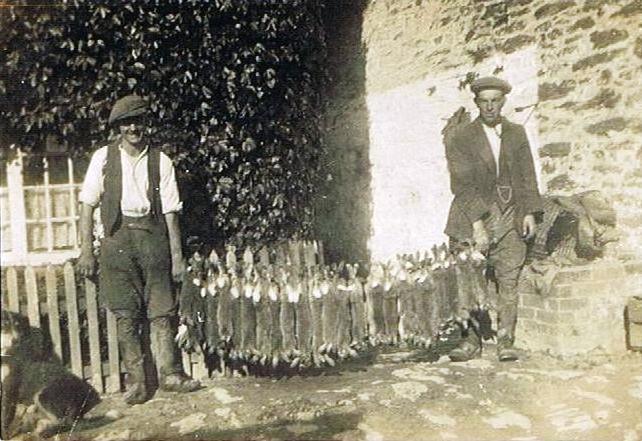 Uncle Billy would pollinate his peach blossom in a tree in his greenhouse, which he used to do with a rabbit tail tied to the end of a long stick.

Uncle Billy often called me by a different name, usually either “Sam” or “George” and he sometimes asked me to go to the pub and buy him 5 “woodbine” cigarettes, which he would break in half and smoke half at a time.

Lots of boys, me included, would make bows and arrows from the willow trees around castle, also, reed sailing boats, which we used to race across moorwell pond.

My father bought me a pony when I was about 10, from Mr. Harding at Rickham Farm. I called her “Betsy”. I used to ride “Betsy” to Kellaton to have new shoes fitted to her 2 or 3 times a year, which would cost 1 pound. The blacksmith was called Bill Wright, and he was a really friendly man, and gentle with “Betsy”. When I was a bit older, I sometimes raced with Clarence Rogers, on a pony that he borrowed from Fred Tripp at South Allington, from Ash Park to the village green. I also used to ride around the village and surroundings with Johnny Green, who had a pony called “Trigger” (named after Roy Rogers horse, but it was a lot smaller).

Most Sundays in the summer time we would all go to Horsley beach, where the older boys would teach the younger children how to swim, and, having great fun catching “goreloppers” (goby fishes) in the rock pools, with a length of cotton and a bent pin, which we would bait up with parts of limpets (my sons remember doing the same when they were children). I would then race home to listen to “Riders of the Range” on the radio at 6 o’clock. There was a big disappointment if the “cumulators” (batteries) had run down and spares were not there from Kingsbridge. This was the period before electricity came to Prawle in the early 50s.

I also would help out on the farm at harvest time. Great fun was had when the rabbits ran from the centre of the field, after most of the corn was cut around the edges of the fields and the area left in the middle was getting smaller and smaller. We would build “stitches” (stooks) which were about 8-10 sheaves propped up together with the ears at the top, to dry out before collection, building them into ricks, which even had thatched roofs, and, were finally threshed to remove the grains of corn. I would lead the horse and wagon when collecting the “stitches”, being careful to only move forward when told to by the worker on the wagon, otherwise, if the worker was not prepared, they would fall over on the wagon and I would get a right telling off.

At the age of 11, I sadly lost my father, which had a profound effect on me for the rest of my life.

Soon after, I started Kingsbridge school, and remember well that on the bus to Kingsbridge, we went via South Pool to collect children and one of the school masters, Mr. Abraham (who later changed his name to Mr. Atkinson), who taught gardening amongst other subjects. On the way back from school through South Pool, then on to East Portlemouth, then to East Prawle, as soon as Mr. Abraham had got off the bus at South Pool, we would all sing Elvis songs with the older Bishop boys from Ford, who were dropped off on the return journey from Prawle to Kingsbridge. My favourite school subjects were gardening and metalwork. I am still using my garden line that I made in metalwork to this day! Mr. Dagger was the metalwork teacher. If one of us misbehaved in metalwork, we were punished by having to cut a thick piece of metal with a hacksaw, which took some time!

Often, I would go with other boys from the village when the Auxiliary Coastguards were practising, and, we had great fun in the breaches buoy riding back from the pretend ships mast. 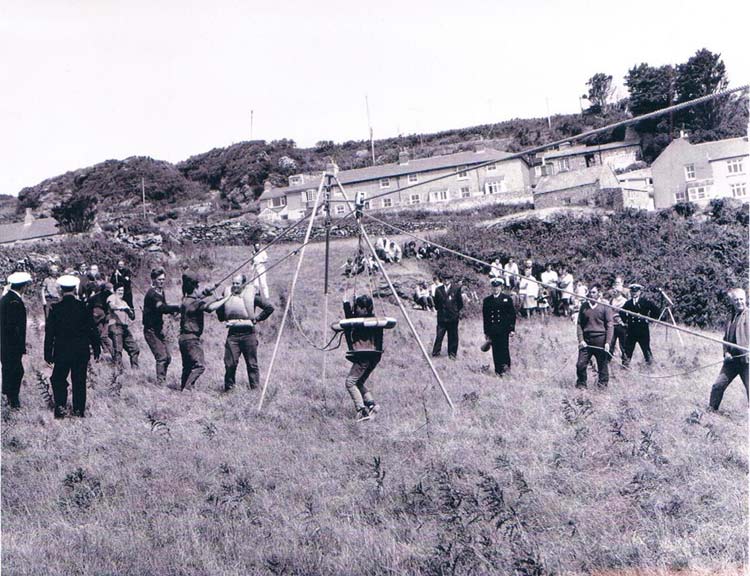 LSA Rocket Apparatus, Practice, Christopher Wotton in the Breeches Buoy, Summer 1970. I am the last person holding the end of the rope, on the right of the photo, in front of the coastguard.

I also used to go to the Kingsbridge Cinema, when some of the older boys paid for Uncle Jack Partridge’s taxi to take them, and there was a spare seat. Uncle Jack paid for me to go into the cinema and we would always have the best seats, upstairs, which cost half a crown each. When arriving back in Locks Farm, Aunty Dorothy Partridge would give me drinking chocolate or sometimes coco broth (dry bread broken into pieces with hot milk and drinking chocolate).

I left school at 15 and started work at Higher Farm for Uncle Geoff Tripp. Fortunately, I had already been driving the tractors for a few years in the fields, so had some experience at it.