Return to Born in Prawle

Alice Stone’s memories from talks with Jane Shadbolt and Kate Jennings in 2011, as well as snippets from East Prawle through the Ages 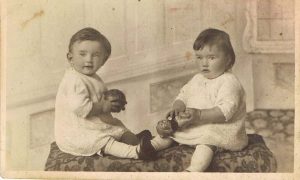 Alice and her twin brother Ernest Stone, before arthritis struck.

Alice’s father, Jim Stone married her mother, Jemima Stone, fairly late in life because he looked after his mother once she was widowed. They had two children, Ernest and Alice, who were twins, born in 1930.

Alice had many problems and spent much of her childhood away from East Prawle, in hospital at Plymouth aged between two and three years old, and subsequently in Hampshire. Alice came home with short irons on her legs and crutches with “a round bottom, sort of like a rocking horse”. They were made of bamboo, straight down. Alice said she has never seen any like them since.

“I remember that we used have our hair cut on a Sunday morning by a Mr Osborne Moor who lived out New Houses and I remember that Mrs Partridge came to the Sunday school with a baby in arms who could have been Richard.”

Alice also remembered: “there were two shops opposite each other on the green and some Saturday afternoons if we could get a penny from father we would buy sweets.” 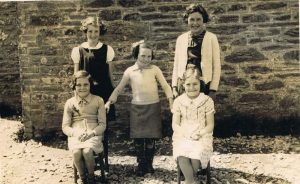 Alice only went to East Prawle School for twelve months – from 1938 until 1939. Once war broke out she wasn’t allowed to go to school. Alice had a bit of homework, never saw a teacher … “I just had the work to do and I presume Ernest took it back you know.”

At nearly 13 Alice went to a disabled school in Sussex, “which was a bit strict – they never went out anywhere because it was the war and had to be in bed by 7.30pm.” It was run by Dame Grace Mary Thyrza Kimmins, a British writer who created charities that worked with children who had disabilities.

Alice was 19 when she went away to St Loye’s College, Exeter (for the Training and Rehabilitation of the Disabled). “That was 1949 to 50, from March to March. And I learnt dressmaking, course I didn’t do sewing when I was at school. They thought that was about the only thing I could do. So I took over from Miss Wotton. She was the seamstress and when I left the college and come home, she decided to give up.”

Alice made wedding dresses, bridesmaid dresses, party dresses, loose covers and anything that was asked. Alice started with a sewing machine loaned by Remploy, but they hassled her because they felt she wasn’t making sufficient money – not an easy thing to do in such a small village.

Alice is tiny and had to balance on her crutches while laying out a pattern. Tall people had to kneel to be fitted. A comment from Elaine Trant: ‘Alice made the bridesmaid’s dress I wore at my sister’s wedding, and lots of others.’

Alice stopped dressmaking in the early 1980s when her arthritis made it impossible.

General memories: Alice’s father was wounded in the First World War in the Somme. He was a stretcher bearer. 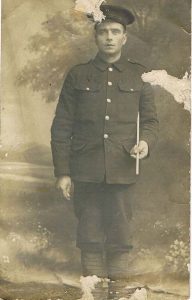 “I remember Father told me, when they were building the new coastguard cottages down at Prawle Point, they left all the building stuff on the green and Father used to take it down with a horse and cart.” Alice remembers that the road down to Prawle Point wasn’t done up till just before the war. It was just a track with stones in the middle.

In 1939 many of the cottages were thatched. “Father had it done in 1939 June – slates put on. I found the bill when we came down here. £64. … And that was taking the thatch off as well, and clearing up the mess. I can remember coming home from school and it’s dark. Mother had to light candles cos of all the reeves? And that was piled up outside the window. Father had the roof slated because we were getting rats and I suppose it started leaking properly.”

“Every Christmas when I was older Mr Foss used to bring a Christmas pudding, because Father used to go down and empty the buckets (at what is now known as Foss Cottage).”

Alice remembered when her father bought Hanley Cottage it had a Lidstone, but they took it out and her mother cooked with a Valor Perfection and paraffin oil. In the 1930s they had a Triplex with two little doors on the top, a fireplace, open grate and an oven by the side, and it was tiled. On the right is a drawing by Jane Shadbolt helped by Alice’s memory, from the book East Prawle through the Ages. 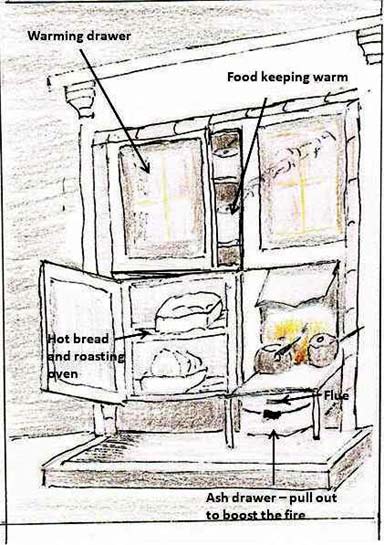 Whitsun/Prawle Fair: “They say that Miss Pritchard used to come with round-a-bout, Whitsun, Whit Monday. Cos we used to have what they called anniversary, Whitsun, and they used to learn pieces and then we have to say them on the stage in the chapel. Ernest hated that, he didn’t like learning.

“Mrs Relle used to run the Brownies, and the Guides. When I used to go out she would take me in the Dickie seat, you know a two seater. It’s a car, like the boot would be now. It was open.