The sisters, Brenda and Hazel, have lived in East Prawle all their lives. Below are some of their childhood memories.

When we were children we didn’t have the toys like the children have today. Our parents were not so well off and we had to make our own amusements. When playing in the garden we would have a couple of bricks and a piece of slate to make a cooker; Mum would give us an empty tin to use as a saucepan and a tin lid as a frying pan and we would pretend cooking for hours making mud pies.

Sometimes we would tie a length of string around a tennis ball. We would go round the village pulling it and pretending it was our dog.

Another thing we used to do was have a cotton real with four little tacks on top, tie on some wool and knit a long round length which came down through the hole in the real; you could make it as long as you like. We then rolled it round in a circle and stitched it to make little place mats.

I went to the Methodist Sunday school (now the Community Hall) at the age of three. My grandfather (generally known as Uncle Bill Putt) who used to take Sunday school, carried me from Sture’s Court to the chapel. My sister Hazel was younger and didn’t go till later, but we can both remember we were never allowed to stop going to Sunday School until we left school at the age of fifteen, and before only if we were unwell. 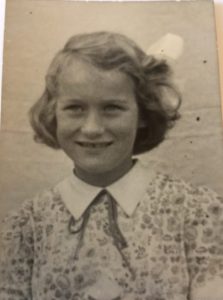 The Methodists in East Prawle were deeply religious. Uncle Bill Putt never read anything but the Christian Herald on a Sunday and was shocked if he found anyone cutting a cabbage or picking peas. Children were only allowed to play quietly. There were six other days of the week.

We were living at Vine Cottage at the time when the war was on and Dad was in the Navy, Mrs Putt at the post office use to get telegrams sent through to her she would write it down and deliver it to you, I would see Mrs Putt coming and would say “telegrom Mum, Bill coming home tonight”. (I couldn’t say telegram.) Mum didn’t like seeing Mrs Putt coming as she thought it was bad news, but she would say “don’t worry Nellie it’s good news”. When Dad had to go back I can’t remember if it was Mr Putt or Mr Partridge that took us to Kingsbridge for him to catch the train; I was about three, Hazel one and half, we used to sit in the car as I was frightened of the steam trains. When the train was leaving Dad would look around the corner, wave to us and blow a kiss, I can picture it now as if it was yesterday.

Another thing I can remember is Hazel and myself went one day to the beach with our mother’s permission with Joan and Shirley Rendle, I think Sally Tucker, Josephine Tripp and Doreen Login were also with us. Mum told us to be home by five o’clock, but as the other girls stayed out longer we did too. When we got home we were sent right upstairs (then living at 2 Town cottage) with a good telling off, and were told we couldn’t have any tea. We heard Dad come in from work, and shouted down to him saying that Mum had sent us to bed without tea. Dad’s reply was ‘I will get your mother to give you some tea, but you stay upstairs, if you had done as you were told you wouldn’t be up there’.

One Christmas, we begged Mum and Dad to let us have a Christmas tree but they both said no.  In those days I don’t think there were fir trees, but Christmas morning we came downstairs and there in the corner by the black lead stove was a beautiful holy bush decorated. Dad had cut it the day before and hid it and when we had gone to bed he went and decorated it, Hazel and myself were over the moon with it, it really made our Christmas.

Another memory is of Mr Jack Rendle, the village carrier, who used to bring home things from Kingsbridge for people as not many villagers had cars! If you had the doctor and he gave you a prescriptions he used to get it for you: you would take it over to him and collect in the evening when he got home, you would pay him whatever he charged, I can’t remember the cost but it was a lot of money in those days I  expect, but today it would be penny’s. His lorry or van whatever done many things: my sister and I can remember as a child going to Kingsbridge Fair. He used to get the bench seats from the Methodist Sunday school put them in his lorry and take a few of us in, our grandmother would give us 2/6d each to spend, now probably 50p, and that would last us all evening and had a great time on it.

When I was going to Kingsbridge school, I used to go out to sleep at Bonaventura where Mrs Webster’s lived. Mrs Webster lived in the old RAF building. Her grandson, Christopher, was in the Royal Marines doing his National Service, and when he was away she didn’t like sleeping there on her own, so I use to go out Sunday evenings before dark and then go to school from there in the mornings. All week I would get off the school bus and go right out there. The only time I use to go home for the day was Saturdays and Sundays. Of course I wouldn’t go out there when Christopher was on leave. I did this for his full two year National service. I was over the age of twelve as we were living at Higher Park then and I was twelve when we moved there from Town Cottage.

A final memory was Hazel, Janet Foal, whose parents ran the Providence then, Carol Lee and myself push biked to East Portlemouth, went across the ferry to Salcombe, bought sweets and pop and then found we didn’t have enough money to come back across the ferry. We had to go back to the shop keeper and ask her if she would take some of the goods back to give us enough money to come across, which she did, and on our way home the chain came off my bike. We managed to get it on again and arrived home hands covered in grease. 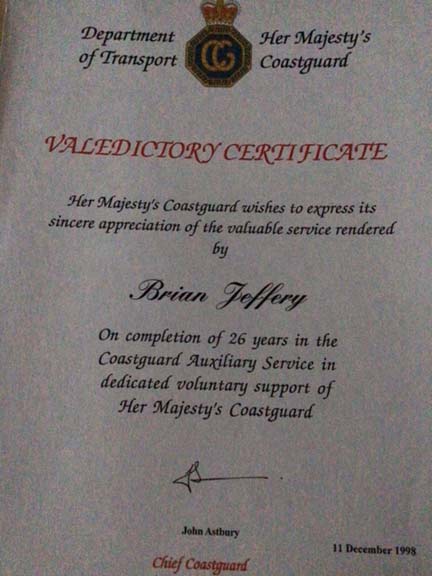