After leaving the farm in 1895, when his father died, the next known place Hop lived was in the old Coastguard Cottages in East Prawle in 1901 with his mother and siblings. 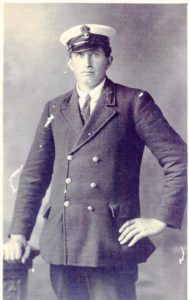 He became a Freemason, joining the Lodge of Fidelity, Devonport in 1914 and was a member until at least 1921. 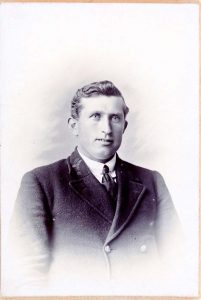 During WWI, at the battle of Jutland, he was ‘dangerously’ injured and blown up twice. As a consequence, he had a metal plate put into his skull.

These injuries appear to have greatly affected him mentally but he was retained in the Royal Navy during and after the war.

Despite the effects of his injuries, he married Elizabeth Alice Putt of East Prawle on 26th April 1920 when he was stationed for a short term at Vivid II which was based at Devonport. It is recorded that they never set up home. He must have gone back to sea immediately after the marriage and they never had children. Elizabeth Alice continued to live in East Prawle and work for Squire Pitt at South Arlington House.

Richard Hopwood Hutchings was reported lost at sea on the 10th March 1923 when his ship, HMS Birmingham, was heading back to Blighty via Bombay having just left Colombo, Ceylon. It was assumed he fell overboard and had possibly committed suicide. He was due to leave the Navy on arrival in England.

He shares a memorial stone in Chivelstone Churchyard with his brother William Trible Hutchings who died from flu, whilst serving in the Army, 3 days before the end of the 1st World War.

Elizabeth Alice eventually received a pension, with the help of Squire Pitt. On the 16th January 1929, she married Alfred Cyril Quick a local man. Elizabeth Alice was also known as Aunty Eliza, Aunt Alice and Aunty Polly and her last residence in East Prawle was the old Coastguard cottages that had been sold off to private ownership. She had a parrot which outlived her. She is buried in Chivelstone churchyard with Alfred Quick.